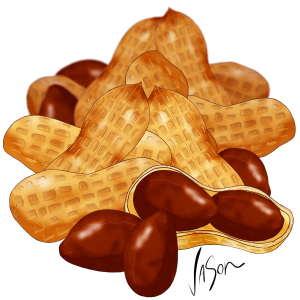 Did you know that peanuts are not nuts at all? Peanuts are legumes –  I know that you knew!

In some countries, peanuts are referred to as ‘groundnuts’ because the peanut flower bends and penetrates the ground after pollination.

While underground, the tip of the flower develops into a pale-brown and brittle pod containing two nuts.

It’s believed the peanut was domesticated in South America, where wild ancestors are still found.

The plant was later spread worldwide by European traders. Cultivation in North America was popularised by African Americans, who brought the Kikongo word goober.

In South America, the peanut is thought to have first grown in Argentina or Bolivia, where most wild strains grow today.

Fossilised peanuts between 10,000 and 100,000 years old have also been found in China, along with records they were grown there on a large scale by the Chinese civilisation.

In most peanut growing countries, there are two main varieties grown commercially  – the large Virginia Bunch variety and the smaller Spanish variety. Although there are many other types grown in lesser amounts.

Although most people predominantly use peanuts as a snack or in products such as peanut butter, many are now discovering their versatility and health benefits.

They can be used in all kinds of sweet and savoury recipes.

Like Loading...
This entry was posted in Food and Cooking and tagged Chef. peanuts, cooking, food, Ford On Food, Jason Ford, peanut. Bookmark the permalink.