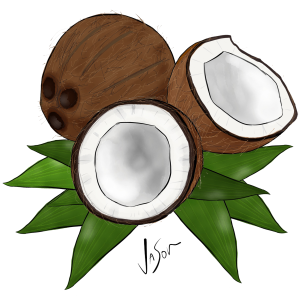 I first experienced fresh coconuts as a child when visiting Cairns in far North Queensland, Australia.

They were in abundance, lying on the ground at the base of coconut palms everywhere – very reminiscent to their native origins on the coastal regions of the Caribbean, South-east Asia and India.

The name coconut is derived from the Spanish word for ‘grotesque face’ , because of the three dimples on its surface, which the Spanish thought resembles a monkey head. I personally think that’s not very fair to monkeys.

In my opinion no other culture on Earth utilises the coconut like the Thai people.

The immature palm shoots are peeled and used in Thai cooking, sugar is extracted from the palm sap, the palm leaves are used to weave baskets, coconut oil, flesh and milk is used in many Thai dishes and the coconut shells are used for the carving of bowls and jewellery.

A whole fresh coconut contains a watery liquid, which is sometimes referred to as coconut milk and is a refreshing drink.

However, this is different than the canned coconut milk and coconut cream – the hard white flesh lining the inside of the coconut is blended with water and pressed through cloth to get the coconut cream, any subsequent pressings aren’t as rich and is referred to as milk.

The flesh is often sold dried in both desiccated and shaved form.

Like Loading...
This entry was posted in Food and Cooking and tagged cherf, coconut, cooking, food, Ford On Food, Jason Ford. Bookmark the permalink.