What Came First… The Egg Or The Plant? 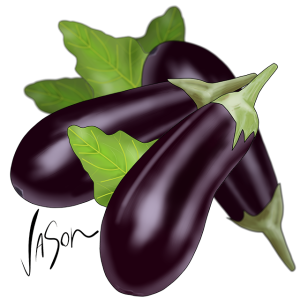 Often referred to as ‘eggplant’, Aubergine is commonly used as a vegetable, but it’s actually as a fruit, related to tomatoes and potatoes.

In fact, the fruit itself is botanically classified as a berry.

And, believe it or not, the aubergine plant is a close relative of the tobacco plant.

There are many varieties of aubergine – some are small pea shaped and some are large pumpkin-like in shape and size.

The most famous dishes made from aubergine are ratatouille (not the movie), moussaka, baba ghanoush and imam bayildi.

However they can be a little bitter in their original form. That’s because they contain the highest level of nicotine of any vegetable, but not enough to be additive.

You would have to eat around 10kg of raw eggplant to consume the equivalent amount of nicotine found in one cigarette.

None-the-less if an eggplant is particularly bitter it may need to be degorged, which means removing its moisture and the bitterness with it, as in the recipe below:

Like Loading...
This entry was posted in Food and Cooking and tagged Aubergine, chef, cooking, eggplant, food, Ford On Food, Jason Ford. Bookmark the permalink.