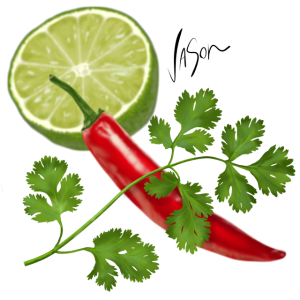 Sometimes referred to as ‘Chinese parsley’ or ‘cilantro’ – coriander is a native herb of the Middle East and Southern Europe.

However, it has also been popular throughout Asia for thousands of years.

It grows wild in Egypt and the Sudan, and surprisingly can also be found growing wild in English fields.

.Most Australians would recognise coriander as an ingredient regularly used in Thai cuisine.

The pungent tasting fresh green leaves almost look like the leaves of parsley, but with more of a flat and jagged appearance.

The fragrant dried seed is globular and almost round, brown to yellow red, and 4mm in diameter with alternating straight and wavy ridges. The seeds have a mild, distinctive taste similar to a blend of lemon and sage.

The taste of the fresh leaves and dried seeds are so different from each other, that some people may love one, yet loathe the other.

Some recipes, such as Thai curry paste often calls for the use the fresh roots of the coriander plant for its earthy, depth of flavour.

Coriander tastes great with ingredients such as chilli, lime and ginger.

Zucchini with Garlic and Coriander

Like Loading...
This entry was posted in Food and Cooking and tagged chef, chilli, coriander, Ford On Food, Jason Ford, lime. Bookmark the permalink.